Everyone has their limit when it comes to dealing with infertility. And everyone’s limit looks totally differently. In this piece, Katie shares why she and her husband Nic decided to stop when it came time to pursue invasive fertility treatments like IUI and IVF, and how she feels about that decision today.

My husband Nic and I fell in love quickly. Our relationship has always been full of spontaneity and big plans. We travel, we moved to Denver on a whim, we camp and hike, and have tons of adventures around our beloved cities of Minneapolis and Denver.

When we were ready to grow our family, we had a long “if, then” conversation, a conversation I have been overwhelmingly grateful for ever since. This conversation was a raw and honest one; “if we can’t get pregnant, then what?”

I’ve looked back on that discussion many times over our 3.5 year-long infertility journey. I’m amazed that we were able to look beyond the veil of fun and excitement and recognize there could be bumps along the way. How did we know to address it so early and so seriously? This was against the norm of our spontaneity and “Let’s just see what happens” mantra that had guided so much of our life together already. I often wonder if that conversation was a small gift from somewhere in the universe to prepare us for all that was ahead.

We talked about how far we would want to go with treatments, testing, and medical intervention like IUI and IVF.  This conversation kept us on the same page when we eventually did have to face those decisions. It set the foundation of our honesty through the process; opening up a space for each of us to express feelings of defeat, exhaustion, and disappointment.

Together we decided we’d be okay if a baby wasn’t in our future. We would still live a full life together, with lots of travel. We could pay off our debt! We could have a hobby farm with goats!

Even though I felt like we’d be okay without growing our family, I knew I was born to be a mother. Deep in my heart I knew we’d have beautiful babies. Pregnancy would be the most magical experience. My time would come. I could feel it in my bones.

I cried to my mom on Mother’s Day. We told our siblings and a few friends. We heard all the usual encouragement; “It’ll happen, you guys will be great parents!” and “It will happen when you’re least expecting it” and we also heard the toughest comments to swallow “Oh, not being able to get pregnant is my greatest fear.”

It was my greatest fear, too. What was I doing wrong? When I felt for so long that this was meant to happen, why wasn’t it?

I knew these comments from our friends and family were coming from their hearts, and not meant to be discouraging or blaming. In so much sadness, people sometimes don’t know what to say. The blame I felt was coming from my own heart.

We were grateful to share this frustration and hurt with people who were close to us; we felt less alone in it.

Nothing, except unexplained infertility.

Nic and I were very honest with one another from the beginning about where we wanted to draw the line as far as treatments. Our line was early, much earlier than most. Together, we decided we would do nothing invasive. No IUI. No IVF.

We felt deeply this just wasn’t our path. We didn’t share this with a lot of people, in fear of being judged for not being willing to do anything it took to get pregnant. My guilt had already begun, and I didn’t even have concrete answers yet as to why we couldn’t get pregnant. But I was already feeling shame for not wanting to try EVERYTHING. Was this my guilt? Or was I manifesting this from societal expectations to become a mother?

So there we were. Facing down what we talked about over and over through our journey: We had reached the limits of how far we wanted to take our attempts to have a baby.

I was devastated. How could this be the end? Yes, we had talked about this possibility, and yes, we were okay with an end result of no children, but it was in this realization that I finally faced that reality head on, and I wasn’t ready to accept it. I spiraled into heavy, heavy sadness. I became closed off to talking about it with anyone. Resentful of other pregnant women.

Just shy of 3 years of trying, we were beginning to feel so downtrodden, and had begun discussing if it was time to step back. A relative who knew of the ache in my heart asked whether or not I had faith in God’s plan for me. God would give me a baby, because He had done it for so many other women in the bible, like Hannah and Sarah. This felt like a punch to the gut. It stuck with me all day. Faith in what plan? Faith in HIS plan? What about faith in my plan? This person never left any space for me to share what my feelings were, I was only given guilt in not trusting a higher power’s plan.

Later that day I journaled, “There is so much sadness, anger, confusion, loneliness, disconnection. I don’t want to talk about any of it. I don’t want suggestions or advice or solutions or help. I got myself here, didn’t I?  Isn’t this my fault? I’m not trying everything, therefore we won’t have a baby. There is so much unfairness in this all I can’t even see straight.” 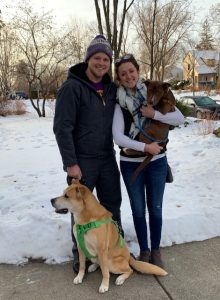 So how did I dig myself out of this? How did I crawl out of these very dark days of realizing I would not be pregnant, and we would not have children? These dark days of knowing our dreams wouldn’t happen? How am I now able to cry tears of genuine joy when I hear of a friend’s pregnancy, and attend her baby shower with full peace within my heart?

I started owning our decision. We were intentional about discussing this possibility and how we would respond, so I needed to own that. I started talking about it.

I owned every piece of it, even the ugly ones.  Yes, I’m sad. I’m devastated.

Yes, I’m angry. Nothing about this is fair. I’m jealous and resentful, and it’s taken me a lot of work and a lot of time to work through those pieces of myself that aren’t pretty. And they aren’t gone. They still creep (okay, JUMP) in and take over pieces of life that should be full of joy.

Nic and I decided again to be all in on our decision, and we would be confident and committed to it. We knew we were at our limit; financially, emotionally, physically.

I talked to my sweet mama who has more empathy than any human being on this earth and she just got it. She said to me “ Oh Kate, this has been such a rough road for you, you deserve some rest”

I deserved some rest.

I talked to my sister. She reassured me “you will always be a mother in so many ways”  I am an aunt. I am a teacher. I am surrounded by young lives I can nurture and love, forever…or for a limited amount of time before I’m ready to go home and have a glass of wine in my childless house. We know we have a level of freedom that comes with being childless, a freedom we love. How do I balance the enjoyment of that freedom with the lingering heavy pain? How do I feel both at the same time?

Then, I talked to a new doctor; Doctor number Six. In a 15-minute tearful conversation I told her the history of our almost four years of struggling. Of hurting. Of being miserable with painful periods, cysts, disappointment, grief, and guilt every month. Of having no answers.

Without question or pause, she delivered the bittersweet probable diagnosis:

“I think you have endometriosis. There’s no reason why you shouldn’t be pregnant, which means there must be a reason why you aren’t pregnant. You are in pain and you deserve not to be.”

And I broke. I broke into weeping tears of devastation and relief. I finally had an answer. For  almost four years I had no idea why I was infertile–and no doctor did either– and then – finally – this “bad” news carried with it the answer. It carried with it an overwhelming sense of relief. I was heard and I was seen. It was a weight lifted off my heart, I could finally breathe with all the uncertainty finally lifted.

My doctor asked how I felt about pursuing some of the diagnostic routes. My husband and I decided we were exhausted. Emotionally and physically. Though a surgery could relieve some of the pain, even that is not guaranteed, and then what? We’d be back to a square one of trying, with a metaphorical “clean slate” of a clean uterus.

Three years is such a long time to feel sad.

Here ended my “unexplained infertility”  and began our decision to close the door on trying to have a baby. We reached the point where we began to recognize the difference between giving up and letting go.

My heart doesn’t ache for a baby anymore

But the sadness is still palpable

How does one exist simultaneously with the other?

What remains most difficult and hurtful is the loneliness.

So I’m talking about it. Even if people didn’t ask, I bring it up without hesitation. When people ask if or when we’re having kids, I am honest. We tried, it didn’t take. It sucks.

I’m refusing to be lonely because I don’t have to be.

There are other women who are feeling the same feelings. And we deserve empathy. We can give that to each other, but so can the people around us. Infertility does not have to be a lonely desert island. No other form of grief is meant to be navigated alone. We are not meant to navigate this alone.

I don’t like to say we “figured out how to get through it” because that implies two things: one, that grief is something to “get through” when grief is fluid. Grief carries on, and we don’t get through it, we learn how to move forward in it. It lessens, but the pain of loss doesn’t disappear when you “get through” a particular season of life. Grief is also not something to “figure out”. Heartache is different for everyone, there’s no secret formula for cracking the code of being sad and moving on. Sadness is different every day.

Instead we’ve committed to creating a life that allows us to grieve and continue to move forward with our next steps. 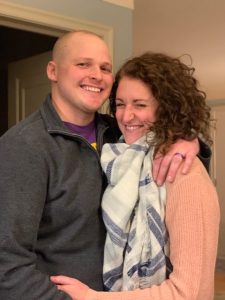 I am finally moving forward with intention, rather than unknowns. I am learning to be gentle with myself.  I know I am allowed to grieve regardless of what I have or haven’t tried. I give myself the grace to grieve.

Be kind to yourself. Be gentle with yourself. Give yourself grace.

Grace also happens to be the name I had chosen to give to my first daughter for as long as I’ve known in my heart that I was meant to be a mother.

Grace is what I will continue to give myself in this space.