What is a “fertility mentor” and why would someone want to become one? Risa Kerslake explains what motivates her to support, encourage and listen to others struggling with infertility.

She brushed aside a mosquito as she talked. It was July — and hot. It was probably too hot to be outside, but I didn’t want to interrupt her and ask if we should go back into the air conditioning because she was telling me about her third miscarriage and how I was the only person besides her husband she had uttered those words to.

We had met that morning. Now it was three hours later and the awkwardness of meeting as strangers was gone because we had both discussed vaginal ultrasounds and timed intercourse and when you talk about those things with people, you realize you can bond pretty quickly. There were birds chirping and a few people that crossed the field nearby us, but otherwise, the only other sound was our laughter when we talked about our partners giving us shots in the butt and the whispers as she explained this was her third IVF — and her third loss.

Three years ago, after the birth of my first baby, I signed up to be a Fruitful Fertility mentor for the reason most do: I wanted to walk with other people who knew the struggle and pain of trying to get pregnant. 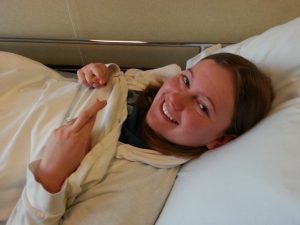 I started blogging about my own fertility challenges back in 2012 because I didn’t know anyone in real life who had been through what I had. And because of that, I discovered a world of infertility bloggers across the world.

I didn’t have to explain what 5dp5dt meant because we all just understood. There were sock exchanges organized for when we went in for our IVF retrievals or IUIs or for when we become PUPO and had to go through the hell of the two-week wait. When someone got a positive pregnancy test there was comment after comment left on their blog post of our congratulations. When embryo transfers failed, or betas started to drop, or a heartbeat someone saw last week was no longer there, we flooded her email with the love that only those who really understand can give.

Becoming a Fruitful Fertility mentor felt like an extension of my old blogging days. Where I had my virtual community, most of the people I’ve met with on Fruitful have hardly told anyone about their fertility issues. As a mentor, I’ve had the honor of being let into that private world for the sole reason that I simply can relate.

I’ve given recommendations to doctors, I’ve forwarded on my best tips to make a PIO injection as least painful as possible, and I’ve helped someone talk through the pros and cons of IVF. I’ve been a sounding board for those whose friends who just don’t get it and for those whose families have no desire to. I’ve sat and cried with someone as they shared with me the worst day of their life.

Most of what I’ve done as a mentor was listen. I think that’s what so many people who seek out a fertility mentor want — someone to just sit and be there. Infertility is an incredibly personal experience with some really tough feelings and emotions. I’ve met with six people now in varying degrees of relationship. My very first mentee is still figuring out her own journey. The woman I met with in the park that day still sends me photos of her miracle baby.

It’s humbling, being let into people’s secret world. To be reminded that during such an isolating experience, there is always be someone out there who is willing to walk you through it.