Diagnosed with endometriosis at age 20, Leah Williams and her husband tried for two years to conceive naturally before deciding to pursue IVF. In this deeply personal piece, Leah shares why IVF was the hardest thing she’s ever done and why she would do it “a billion times over” if she had to.

Everywhere I look I see babies. Babies or pregnant women, and it makes me want to just sit at home and have a good old snot-dripping-out-of-my nose cry.

This is how I felt this time last year. And the whole two years prior to that. Glowing pregnant ladies and adorable little babes are supposed to make you smile, right? That is unless you’ve been trying to get pregnant for what seems like an eternity and you’re wondering if it’s ever going to happen for you.

If you’ve struggled with fertility you’ll understand what I mean. The crazy thoughts that go on in your head. You feel guilt. Guilt that you avoid your friends that are pregnant or already have babies. You make up excuses as to why you can’t grab coffee, why you’re never free, you’re just so busy. But really you just can’t fathom seeing that bump, or that little baby’s face. Each excuse you make you hate yourself that little bit more. You see a pregnant woman in the street and you wonder why. Why is she so incredibly lucky that she gets to be a mother? You wish it wasn’t her. You wish it was you. And there comes that guilt again. Hitting you smack in the chest.

We’d been trying to have a baby for two years. Two years of ovulation tests, acupuncture, cycle tracking, Googling, waiting, negative tests, and so it goes. I was diagnosed with endometriosis when I was about 20 and after six surgeries, I always knew we might have issues trying to conceive. I guess I just hoped I’d be one of the lucky ones. The baby making had taken over our lives. Everything revolved around my cycle. Each month as my period was late I thought maybe, “This is it,” only to see another negative test, followed by my period a few days later. I’d be heartbroken, and the cycle would start all over again.

In January 2015 we decided it was time to face the inevitable and really look into this whole IVF thing. I was sick of just trying every month, knowing the chances of it working were pretty slim. I felt like my body had failed me. I mean, isn’t this what we’re built to do? I needed a new plan. To move forward, rather than sit in this limbo land with nothing working.

We chose a specialist and went through the rounds of tests that needed to be completed before we could start.

As I walked into the clinic, for the very first time, on Tuesday 24th of March 2015, I felt so many emotions. Excited, scared, worried, nervous, anxious… I was TERRIFIED that it wouldn’t work and we’d never have a baby, something we both so badly wanted. The nurse went through the massive list of drugs I’d be taking and showed me how to inject myself. So off I went home with a cooler bag full of needles and drugs ready to make a baby.

The first part of an IVF round is all about stimulating your ovaries to make more eggs. I woke up the first morning, nervous and excited all at the same time. It took me a good ten minutes to work up the courage to stab that first needle into my belly, but I did it, and it wasn’t as bad as I thought. 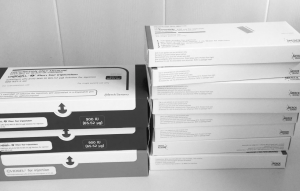 I had to do this each morning, and then go into the clinic every second day for a blood test. Every second day I’d drag myself into the clinic, sit in the waiting room and wait for my name to be called out for another blood test. Another needle. I’ll never forget the vibe in that waiting room, there is nothing else quite like it. Everyone just sits there with their head down, not wanting to make eye contact. Sometimes you’d catch someone’s eye and you would smile at each other, knowing that they’re the only person right now who really gets what it is you’re going through; the angst, the pain, the total heartbreak.

I quite surprised myself with how well I was coping at this point. The drugs were making me feel absolutely rotten. It was like I had the worlds worst hang over, minus the drinking and fun times. The headaches, nausea and exhaustion were like nothing else. Oh and the mood swings. I kept on going though, went to work each day and tried my best to hide what was going on. It’s a funny thing IVF, most of us keep it such a secret when going through it. I had told a few of our close friends, and family, but not many people. It wasn’t that I was ashamed of it, more that the less questions I had to answer the better. The less people I had to tell it hadn’t worked, the better.

So right in the middle of your cycle you start whacking yourself with another injection, one to stop ovulation. So two injections in the belly each morning. At this point my tummy was looking like a pin cushion and I was getting a little over shooting up every morning! The next shot is the all important trigger shot. This is the one that that tells your eggs it’s game time. My egg collection was locked in and we were ready to go.

Sunday the 5th of April 2015, Easter Sunday, the day of my egg collection. Easter Sunday, kind of fitting huh? I had an egg hunt of my own going on. I remember waking up and just knowing the importance of this day. Would I get enough eggs? Would I even get any eggs? They’d monitored me along the way with scans and I knew I had quite a few good eggs on each side, however you never really know how it’s all going to go until they get in there. The anesthetist saw me first thing and we talked about how sedated I wanted to be during the procedure. I explained that I’d prefer to be conscious and see how I went. I got into my super hot hospital get up and away we went.

I remember climbing onto the bed, seeing my specialist, three nurses and my partner but that’s where my memory of it stops. Apparently they started the procedure, (they stick a giant needle into each of your ovaries to get the eggs out) and I was moaning and crying, so the anesthetist made the decision to just knock me out completely. Waking up in the recovery room, the first thing anyone doing IVF wants to know is how many eggs they collected. My number was a good one, thirteen.

The next week was all about recovering. Due to my endometriosis and previous scar tissue I was pretty damn sore and in quite a bit of pain. We received phone calls from the scientist who makes our baby (did I mention we met her in the clinic, so weird!) over the next few days giving us an update on how our embryos were going. On day five we had 6 good ones, this was an amazing result, and the transfer was scheduled.

Transfer day rolls around and I’m all sorts of nervous, scared and excited all over again. The transfer is super simple, kind of like a pap smear, 10 minutes and it’s all over. Then you go on your merry way and keep your legs crossed for the next two weeks. No, not really, but I kind of felt like I should. Next comes the waiting game, ‘the dreaded two-week wait’. Two whole weeks where you wait to see if there is a baby in there, if all this pain and angst, AND MONEY, was worth it. After two weeks you go into the clinic for a blood test for your results, but of course there is nothing stopping you testing at home. I wanted to try and hold out for as long as I could. Every day I’d walk home from work and be ready to do a test, then chicken out as I was just too terrified in case I saw a big fat negative. I lasted 7 days.

I got home on a Friday night and decided to just do it. I peed on that stick, waiting the minutes, closed my eyes, gritted my teeth and looked at the stick. Negative. My heart sank. I cried for hours until my partner got home. I was disappointed that I didn’t stick it out and wanted to go back into the phase of not knowing. Anything was better than knowing it was a negative and there was no baby and we’d have to try again. My partner asked to see the test and we fished it out of the bin. We looked at it again and if we really squinted, could see the faintest of lines. I knew you weren’t supposed to take the result of a test if it was after ten minutes, but I’d never seen this line before, with any of the billion tests I’d done over the years. Of course I then got on Google and realized it may not be over yet. 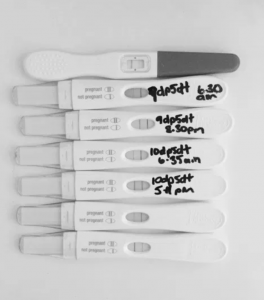 We decided to wait until Sunday morning and take another test. These few days of waiting were so damn hard. I’m the most impatient person at the best of times, let alone at times like this. Sunday morning rolled around, I couldn’t sleep so got up at 6am and took a test. A line appeared immediately. We were pregnant. It had worked and it looked pretty promising that there was the start of a baby in there! I then of course took a test, sometimes two, every day until my official blood test at the clinic. The line just got stronger each day. We knew it was looking good, but decided to wait until we had the official word until we really let ourselves feel it.

I’ll always remember the day of my official blood test. It was during these massive storms in Sydney. The wind was howling and it was absolutely pouring with rain, but I was filled with excitement, but oh so nervous. At midday I received the call from the nurse, and she said the words I’d been waiting to hear for years “Congratulations, you’re pregnant.” I didn’t quite know what to say, so instead, I just cried.

IVF is the hardest thing I’ve ever gone through, but my god it was worth it. We were one of the lucky ones who got their positive on the first round. It’s not this easy for everyone and my heart breaks for those who go through this for months and even years. I feel lucky every single day that we got there and got our baby. We are so damn lucky.

As I write this now I look down at our little lady, the love of our lives and now it’s her that makes me weep, oh how full my heart is now.

This post was originally published on 6/5/2016 on Leah’s blog The Dearest Days.